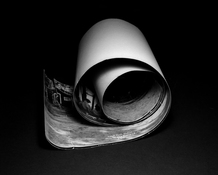 In A Matter of Time 2020-Present
Recently, while rummaging through family photographs, I discovered a collection of tightly rolled photographic scrolls originally taken with a large format banquet camera.  I decided to strategically unfurl and rotate these scrolls, sometimes lighting both the front and back of the image, in order to explore different relationships between the printed image and signatures on the back as well as the presence of people and nature.  Given the relationship a photograph inevitably has with the past, my desire is to foreground the act of remembering, an elusive process at best. 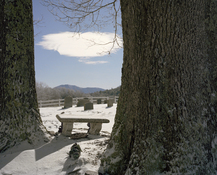 Relative Time 2013-Present
For many years, I have been photographing cemeteries located on state lines across the US. One of the attractions of these places is the convergence of the present with the past. This convergence is visible in how the upkeep of the cemetery compares with the landscape adjacent to the site. Cemeteries, like mounds and pyramids, are part of a larger story narrating the impact humans have on the landscape.

Like a surveyor, my tripod is planted in the cemetery with the camera lens directed towards the neighboring state. Adopting this position was critical in thinking about the invisible lines that divide swaths of land into separate states.

Sequencing the photographs according to season is another way of acknowledging the passage of time.  Occasionally, a passing vehicle disrupts the stillness of the photograph. 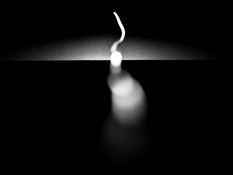 Lifelines 1994-Present
The conveyance of energy is the heart of this project. All of the cords depicted in these images supply the electricity to the light source, which makes the photograph possible. Sometimes, the cable changes its identity from a crisp line to a faint trace, as if it was a ray, wave, particle, halo, or flare of light. The series also includes re-wired cables that have been damaged or worn, and are in varying states of repair. 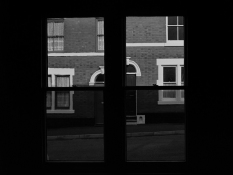 Lookout 1988-2017
The windows depicted in Lookout were photographed in the United States, Great Britain, Australia, and the Czech Republic, countries where I have lived for an extended period of time. Lookout is a collection of observations into how we live in proximity to other people and nature, and how we strike a balance between the desire for contact, concern for security, and our need for privacy.

A Prague Spring 2016
These photographs were made to accompany Michael Salcman’s book of poetry, A Prague Spring Before and After, published by Evening Street Press in 2016.  The images depict iconic buildings and places in Prague.  The movement of pedestrians and vehicles visible in some of the pictures show how crowds of people navigate the city.  These ephemeral traces contrast the grandeur of the surrounding architecture. 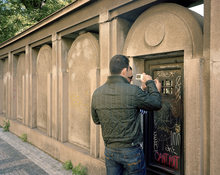 The Present Past 2010-2015
The Czech Republic is one of the richest countries in Europe with regard to Jewish sites and artifacts. Spared from being bombed, Prague and the surrounding countryside contain over three hundred buildings and burial sites, and represent the largest vestige of Jewish culture and heritage found in Central and Eastern Europe.

The ubiquitous stone wall covered in ivy is a common feature of Jewish burial grounds. What particularly struck me were the details of the environment found next to these walls, such as adjacent fields, the distribution of trees around the site, and nearby buildings.

The cemetery’s boundary wall, rather than the headstones, draws attention to a particular history of the place. Throughout the series, these walls course through the landscape and towns, and are a reminder of a not so distant past. 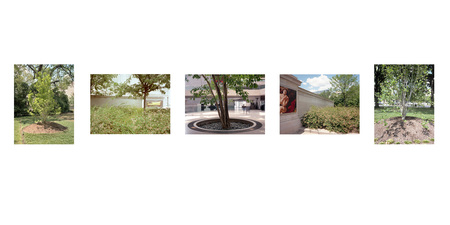 Kiley's Trees 2013
In 2013, I was commissioned by the Cultural Landscape Foundation to photograph Dan Kiley’s landscape design for the National Gallery of Art as part of the centenary celebration for this prolific designer. The sequence of images responds to both the exterior and interior aspects of his design. I titled my piece "Kiley’s Trees" to draw attention to the presence and position of trees planted in the garden adjacent to the West Building as well as those trees growing in the foyer of the museum's East Building designed by I.M. Pei. 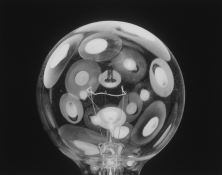 Lightheaded 1999-2003
The photographs in Lightheaded record a bulb’s interaction with other actual or reflected lights, thus making it possible to explore the boundary between the various light sources. Through the action of light, this boundary becomes more fluid. The images generate a dialogue between such qualities as opacity and transparency, individuality and commonality amongst others. 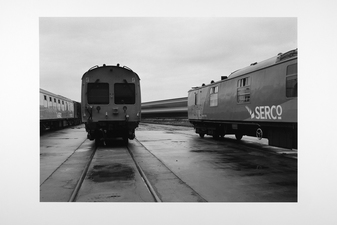 Split Second 1998
My interest in process as well as a sense of place was central to the work I produced for Split Second, a commission supported by Serco Railtest Ltd, in partnership with the Montage Gallery, and Derby Pride Ltd. This series of photographs showcases the work of engineers in their ongoing effort to monitor and maintain the condition of the rail track throughout Britain.

After interviewing the managers of the various engineering departments, I decided to act as a foil with my humble analogue equipment. In doing so, my aim was to celebrate the instrumentation and technical procedures that Serco uses in its evaluation of the track and envelope through which the trains pass. In order to incorporate Serco’s sophisticated imaging processes alongside my analogue photographs on the same surface, I used digital technology for making the final prints. 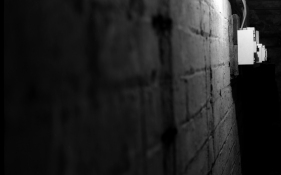 Interior Light 1992-1997
The idea of a house full of light is a response to the illumination found in domestic settings. Light sources such as desk and floor lamps are photographed in a variety of situations. Beginning with views of the cellar and ending with pictures of windows at night, an imaginary dwelling is constructed from these images. 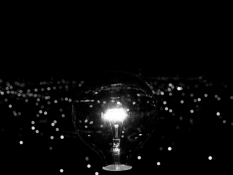 Corporation House 1995-1996
The images for Corporation House, a Modernist-style office block located in the center of Middlesbrough on the Northeast coast of England, were made over a period of a year. Panoramic views of the city’s industrial sections, residential neighborhoods, and shopping areas can be seen from the top floor of the building. I was able to explore this skyline at different times of the day and night, under varying weather conditions.

The presence of a single light is included within each photograph. As an orienting device, the identity of this light changes in response to the interior details and exterior view. The reflection or flare from the light bulb both mediates and connects the interior with the outside view. At play here is the idea that the flow of energy locates the building as part of a network rather than an isolated architectural unit.

1:1 1990-1993
The large laminated black and white images in 1:1 depict various cloud formations. Cloud fronts and individual clouds are isolated in an exaggerated black space. The character of the black shifts between cloud and sky, infinite space and surface. Particular attention was paid to the installation of these photographs and their relation to the floor and other architectural features. The ambiguity of the image and the disorientation experienced by the spectator raise questions about the role of artifice in our perception of nature.

Furniture Fictions 1986-1989
Furniture Fictions is a photographic collection of imaginary tables, workbenches, and desks. The form of the table is made by juxtaposing plan views of tops with front elevations of the legs from different tables. The use of montage allowed me to bring disparate worlds together. Social relationships, nature as resource, commerce, and consumption are explored in some of the juxtapositions. Other tables look at the poetic aspects of time and light. Thus the clamor of daily living is contrasted with the more ephemeral side of life. 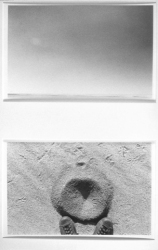 Horizons 1979-1981
These photographs were made when I was living in Australia during the late 70s and early 80s. I was fascinated by the extraordinary landscape of the outback. The severity and seeming emptiness of the desert was a challenge to photograph. The topography has none of the picturesque elements that one associates with landscape imagery.

The complete set of photographs represents one journey of some four thousand miles. Rather like a surveyor, I photographed the horizon and the ground at my feet from the same vantage point, thus establishing a dialogue between the pairs of images. The photographs of the ground depict a world that is alive and varied. While the view of the horizon is indeterminate, the presence of my shoes imparts a sense of scale to the rocks, flora and fauna shown.
Loading...